We spent five nights in Astorga, resting, reading, eating. Every morning, Dad would get up, strap on his pack and walk five kilometers to the next town - Murias de Rechivaldo - where he would have a coffee and croissant, and then walk back to Astorga, just to stay in shape. I didn't go with him on the first day, and on the rest of the mornings, though I did go with him, I did not carry my pack.

In Murias we found one of the gems of the Camino, a small cafe called, Meson El Llar. The owner, Pilar, is an exuberant force providing handmade breads, cakes, and sandwiches including a vegetarian bocadilla made with organic produce freshly harvested from her garden.

On the morning I met her, Dad introduced me as his daughter. Pilar turned towards me with her arms open for an embrace and I found myself - under the spell of the tango music she constantly plays - slipping one arm around her waist, clasping her other hand in mine and spinning the two of us through the opening steps of a tango. A delightful meeting of minds and hearts and tango aficionados.

There is nothing to compare with a restaurant run by someone who lives to nurture others by feeding them beautiful food. All juice was hand squeezed to order. All dishes were prepared and presented with love and enthusiasm. Her artisan bun with fried huevo, jamon, and queso made me pity the pale shadow of an excuse for food that is an Egg McMuffin.

This morning, we were leaving Astorga for the last time and heading out again for Santiago. We were saying goodbye to Pilar too, so she made a special "chocolate" for me - a cup of hot chocolate literally as thick as pudding. In it she mixed orange and cinnamon. Amazing. She toasted bread on the grill and served Dad's and my cafe con leche with the tostada plus fresh butter and honey so thick it spooned up and spread like jam.

While we were eating a woman came out of the restroom holding a money belt and asking who it belonged to. Some poor peregrina had accidentally left it behind when she walked off. How dreadful to have to walk back from wherever she was once she discovered the mistake; but at least her passport and money were safe with Pilar.

As Dad and I embraced her and were saying our goodbyes, Pilar said to him that she had been born too late to know her grandfathers and that he would be her grandfather. Dad was happy to agree. We waved farewell and set out for the next small town, Santa Catalina de Somoza and the albergue there where we had reservations and to which 'JacoTrans' would be delivering my pack later in the day.

We arrived a little before noon and found other pilgrims there with whom we had shared breakfast at El Llar. They told us that the lost money belt had been recovered. Pilar had been so concerned about the pilgrim-sans-documents that she had gotten in her car and driven along the Camino to try and find the owner of the money belt --and had succeeded in reuniting the two. This is how it is along The Way.

In the meantime, Dad continues to collect grandchildren. A pair of young men from Korea stopped for beer and rest in Santa Catalina and were chatting with Dad. When they learned he had been in Korea for the war, they spoke with deep gratitude of the sacrifices of American soldiers who died there and they thanked and offered blessings and gifts to Dad for his service, calling him 'Grandfather' and asking to have their pictures taken with him.

By latest count, he has collected a Spanish granddaughter and two Korean grandsons in addition to the Chinese granddaughter he picked up during law school (not to mention the seven grand kids and three great-grandchildren that came to him by the more usual way).

There is no wifi service here in Santa Catalina, so we are having a lo-tech afternoon, lazing like lizards in the afternoon sun. Tomorrow, we walk to Rabanal. I plan to continue to have my pack ported for the next week or so while I get back in condition. I may even decide to have it ported after I'm back in shape. Walking free of the 20 pounds is a lovely feeling 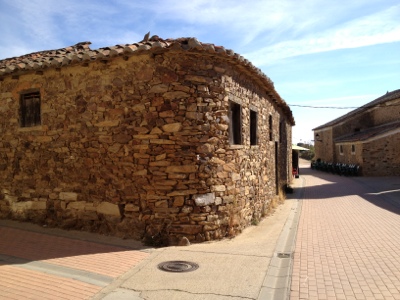 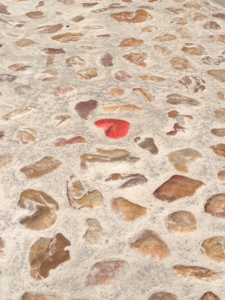 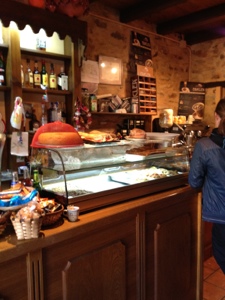 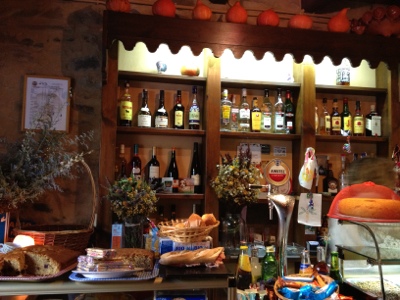 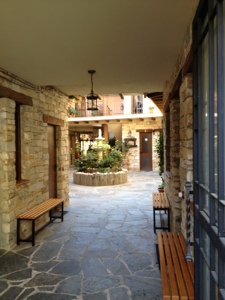 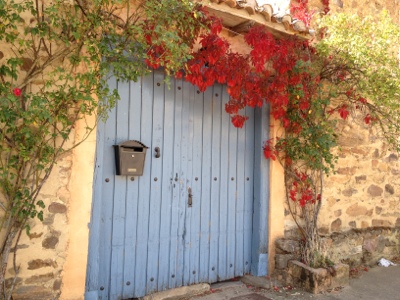 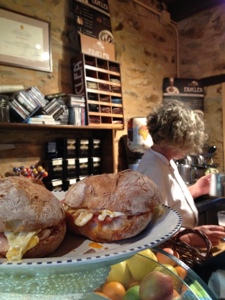 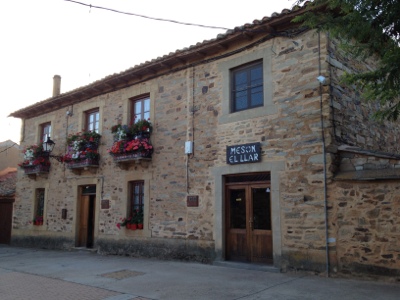 Posted by CaminoLindaa at 1:41 AM